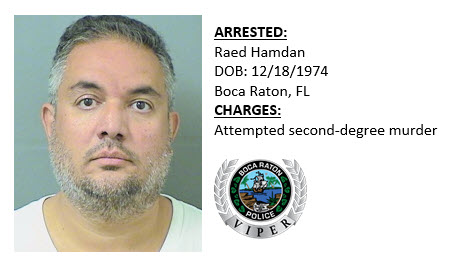 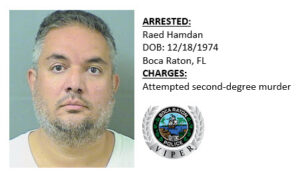 Boca Raton, FL – On September 30, 2019, just after 4:00 p.m., Boca Raton Police responded to a report of a subject who had just been shot along the 2500 block of NW 1st Avenue. Upon arrival, officers made contact with the victim who appeared to be suffering from multiple gunshot wounds. The shooter, identified as Raed Hamdan, was still on the scene and was quickly detained by officers. The victim was transported to Delray Medical Center.

Hamdan advised Boca Raton Police investigators that he was involved in a dispute with the victim over money and the two agreed to meet at an auto body shop. When Hamdan arrived in his vehicle, the dispute continued and Hamdan shot the victim multiple times. After speaking with witnesses and reviewing surveillance video, Hamdan was placed under arrest and charged with attempted second-degree murder.

If anyone has any information relevant to the investigation, they are asked to contact Detective Darryl Kingman at 561-620-6096.