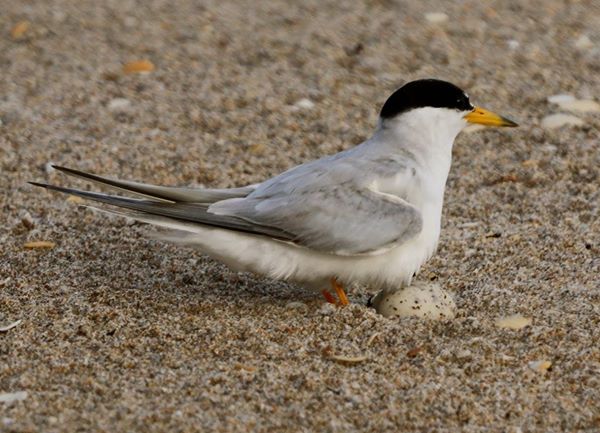 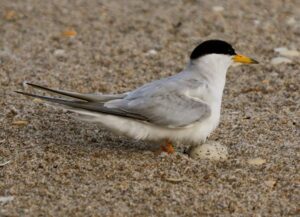 From the city of Deerfield Beach,Facebook-

#DFB is currently home to a number of breeding Least Terns, with approximately 50 nests on the beach. According to FWC, this is the only ground nesting Least Tern Colony south of Brevard County along the entire Southeast Florida coast, including the Florida Keys. The City designated the Least Tern as the official Deerfield Beach City bird to help raise public awareness of the unique behavior and habitat requirements of the Least Tern. Thank you to Patti Sirbola for capturing these amazing photos and allowing us to share with everyone. #LoveDFB #LeastTern #Birds #DeerfieldBeach #Deerfield #Florida #FWC

The least tern is the smallest tern in North America.  Least terns can reach a length between 8.3-9.1 inches (21-23 centimeters) with a wingspan of 21-23 inches (53-58 centimeters) (Thompson et al., 1997).  Least terns have long pointed wings and a deeply forked tail.  Other physical characteristics include a yellow beak, gray back, white belly, and black cap.

Like all North American terns, the least tern has long, pointed wings and a deeply forked tail. It is the smallest of our terns, and bears outer wing feathers that edge the light-gray wings in black. The breeding adult is gray above, white below, with a black cap. 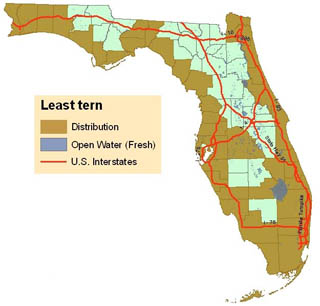 Not only are the birds extremely susceptible to nest disturbance, they have lost extensive nesting habitat to beach development and increased human activity there. Least terns are colony nesters, meaning they nest in a group, which allows them to exchange information about food sources, as well as to detect and mob predators. An entire colony can be easily destroyed by predation by red foxes, raccoons, dogs and house cats, by human trampling, or by catastrophic storms.

In the past couple of decades, due to habitat loss, least terns have taken to nesting on flat roofs, especially gravel ones. The Florida Fish and Wildlife Conservation Commission has developed an educational pilot program being implemented in Pinellas county. The program is to help business (or home) owners educate their customers about having tolerance for least terns that are ‘squatting’ on their flat, gravel roofs. A poster was developed to promote the public educational project.

Least terns do respond quickly to improved habitat, such as the removal of beach vegetation or the dumping of dredged sand. Least tern populations seem to be slowly rising, although they are still listed as ‘threatened’ by the state. At many nesting areas, signs warn people against entering colonies, many of which are roped off during breeding season.

The least tern inhabits areas along the coasts of Florida including estuaries and bays, as well as areas around rivers in the Great Plains (Florida Natural Areas Inventory 2001).  In Florida, the least tern can be found throughout most coastal areas.  Outside of Florida, least terns are found along the U.S. Atlantic Coast, mid Atlantic states, and down from Mexico to northern Argentina (Florida Natural Areas Inventory 2001). 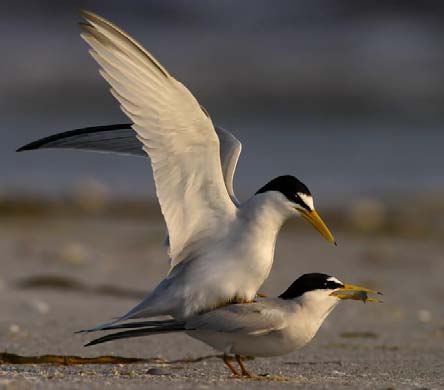 In early spring least terns return from wintering grounds in Latin America. They soon pair up using courtship rituals in which hopeful males offer small fish to prospective mates. The shorebirds nest in very shallow depressions on broad expanses of bare sand, which camouflage the eggs. They lay from mid-April in south Florida to the first of May in the north, and the eggs hatch after 21 days. The young leave the nest in a few days, but don’t begin to fly safely until about three weeks later.

The least tern’s diet primarily consists of fish, but they will also feed on small invertebrates. (The Cornell Lab of Ornithology, 2011).

Male least terns have a unique courtship ritual.  During courting, the male will offer the female food in hopes of gaining her choice as a mate.  Once the two mates are together they will begin building the nest in shallow depressions in bare beach sand.  Least terns will also build nests on gravel rooftops.  Least terns lay eggs between the middle of April and the beginning of May.  The eggs are camouflaged to help prevent predation.  Egg incubation lasts for 21 days.  Young least terns are able to leave the nest three to four days after hatching.

The least tern faces many threats as the human population increases along the coasts.  The main threat to the least tern population is habitat loss.  Loss of habitat is often attributed to coastal development.  Coastal development causes damage to least tern habitat because of the building on the coasts, human traffic on the beaches, and recreational activities.  Increased numbers of predators due to the larger amounts of available food and trash for scavenging are also a threat to the least tern.  Predators can cause destruction to breeding colonies while they are nesting by destroying nests and eating chicks and eggs.  Also, global climate change is an impending threat to the least tern.  Rising sea levels and more frequent strong storms may damage and destroy least tern nests, as well as habitat.  Spring tides can also cause flooding of least tern nests.  Other threats to the least tern include shoreline hardening, mechanical raking, oil spills, response to oil spill events, and increased presence of domestic animals (Defeo et al. 2009). 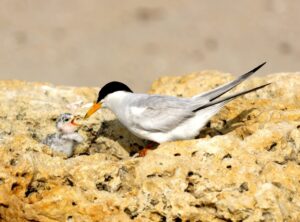 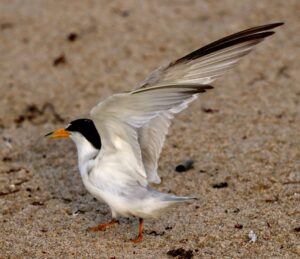 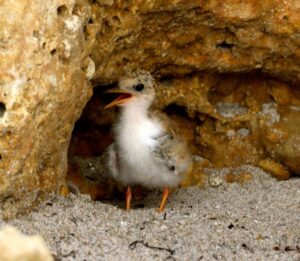