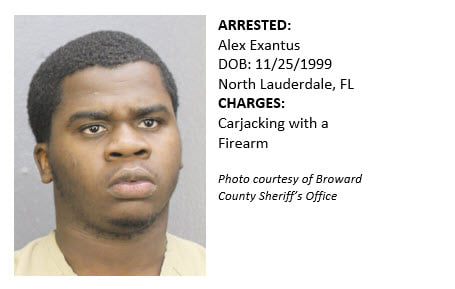 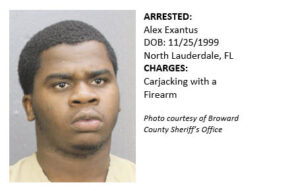 Boca Raton Police charge subject with Armed Carjacking
Boca Raton, FL – On Friday, November 13, 2020, at approximately 12:30 a.m., Boca Raton Police responded to 431 Plaza Real in reference to an armed carjacking. The victim advised he was sitting inside his Cadillac ATS in Garage A when a white sedan hit his vehicle. The victim exited his vehicle to assess the damage, and the white sedan parked next to him. Two subjects exited the white sedan and approached the victim. One subject grabbed the victim around the neck while the other subject removed the victim’s cell phone from his hand. Once the victim broke free from the neck restraint, one of the subjects pointed a firearm at him and the victim quickly ran out of the parking garage. As he was running, he noticed the white sedan following his Cadillac out of the garage. The victim continued to a nearby restaurant to call police.
The Cadillac was later located by Broward Sheriff’s deputies in Pompano Beach. The passenger, identified as Alex Exantus, was taken into custody after fleeing from the vehicle and the driver, Ariel Collazo, was found deceased inside the vehicle. Boca Raton Police detectives responded and interviewed Exantus who was subsequently charged with Carjacking with a Firearm.