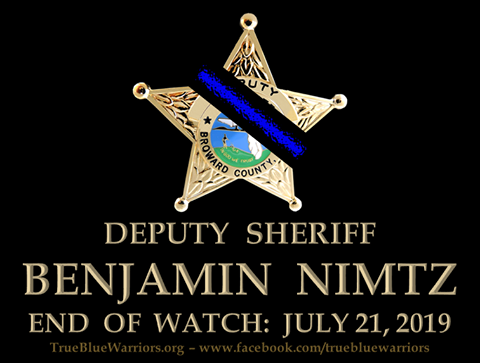 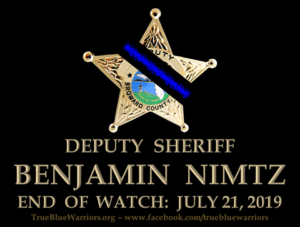 Broward Sheriff’s Office traffic homicide detectives arrested a Boynton Beach man for the death of Deputy Benjamin Nimtz.
Darran Johnson was arrested Wednesday afternoon on Aug. 14, 2019 at BSO’s Central Broward district office in Fort Lauderdale. Johnson faces vehicular homicide, DUI manslaughter and eleven other criminal counts and infractions.
The fatal crash occurred around 3 a.m. July 21. Deputy Nimtz was responding to assist other deputies on a domestic dispute. Traffic homicide detectives said Deputy Nimtz had his emergency lights and siren activated as he was traveling southbound on Military Trail approaching the intersection of Southwest 10th Street. A second vehicle, a Toyota Tundra driven by Johnson, was traveling eastbound on Southwest 10th Street above the posted 45 mph speed limit.
BSO detectives said as Deputy Nimtz entered the intersection, Johnson ran the red light and struck the passenger side of Deputy Nimtz’s patrol vehicle. Investigators said impairment on the part of Johnson is also considered a contributing factor in the fatal crash.
Broward Sheriff Fire Rescue transported Deputy Nimtz and Johnson to Broward Health North.  Deputy Nimtz succumbed to his injuries and was pronounced dead at the hospital. Johnson was treated and released later in the week.
Anyone who was in the area of the crash and has any additional information regarding this incident is asked to contact BSO Traffic Homicide Detective Carlos De Jesus at 954-321-4842.