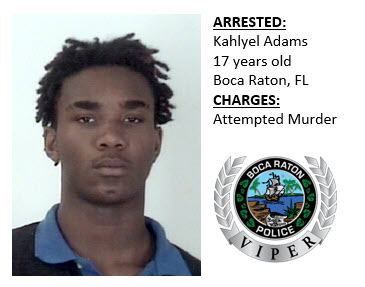 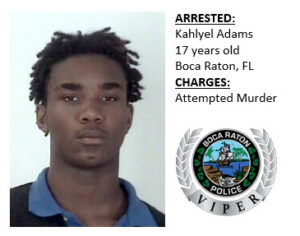 Boca Raton, FL – On Friday, October 18, 2019 at approximately 4:00 a.m., Boca Raton Police responded to reports of shots fired in the Oaks of Boca condominium complex. Officers made contact with a male in the parking lot who had been shot several times. He was transported to Delray Medical Center.

Boca Raton Police detectives spoke with witnesses and the people involved. The investigation revealed a couple, including the victim, was engaged in a domestic disturbance and a friend was contacted by one of the parties. The friend and other known subjects, including the suspect, responded to the neighborhood and the disturbance continued in the parking lot near the clubhouse. At some point, 17-year-old Kahlyel Adams, fired several shots at the victim before fleeing the area.

Boca Raton Police detectives were able to locate Kahlyel Adams in St. Lucie County. On October 19, 2019, he was arrested and charged with Attempted Second-Degree Murder.