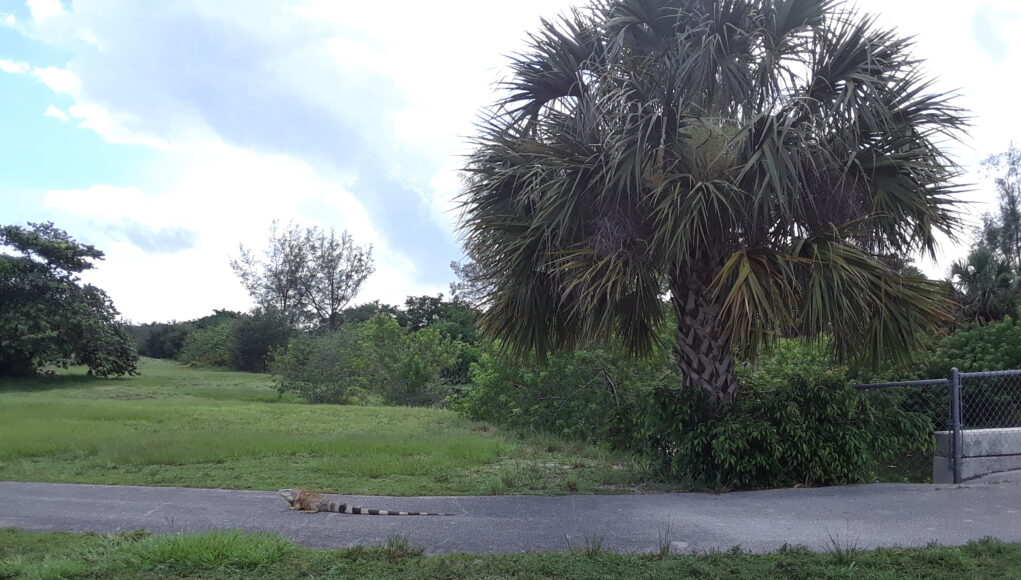 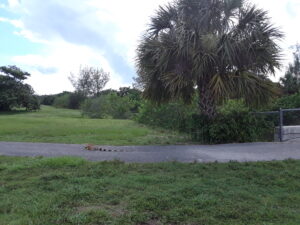 Deerfield-News.com-Deerfield Beach, Fl-In case you missed the top story it is FWC issues directive allowing property owners to kill Iguanas, whenever possible. Again, this was information the FWC put out this week that national new media has covered.

Those invasive non-native nuisance Iguanas FWC says require no permit to kill. In fact, they seem to encourage property owners to do just that. We certainly have noticed the proliferation in recent years in Deerfield Beach. We know of some areas at Quiet Waters Park that flat out is infested with iguanas. We have seen many in CVE over recent years as well as all around town in Deerfield. Some of these suckers are the size of gators.

The iguana removal industry has flourished in South Florida in recent years as these critters can burrow and cause structural damage. Just do a simple Google search on Iguana removal or iguana control see how many results pop up.

Here is what the FWC says about iguanas.-

Green iguanas are not native to Florida and are considered to be an invasive species due to the damage they can cause to seawalls, sidewalks, and landscape plants. This species is not protected in Florida expect by anti-cruelty law. Homeowners do not need a permit to kill iguanas on their own property, and the FWC encourages homeowners to kill green iguanas on their own property whenever possible. Iguanas can also be killed year-round and without a permit on 22 public lands in south Florida.

Captive held iguanas are regulated as Class III wildlife in the State of Florida. A permit is not required to possess green iguanas as personal pets. However, a License to Possess Class III Wildlife for Exhibition or Public Sale must be obtained to possess these reptiles for commercial use and a Captive Wildlife Importation Permit is required to import this species into the state.

The green iguana (Iguana iguana) is a large lizard that is green to brown to almost black in color, although they usually remain predominantly green as they mature. Some adults can take on an orange or pink coloration during certain times of the year. Hatchling and young green iguanas usually have bright green coloration.

Male green iguanas can grow to over 5 feet in length and weigh up to 17 pounds. Females reach lengths similar to those of males, but usually do not exceed 7 pounds. Females typically reach reproductive maturity at two to four years of age. Green iguanas typically mate in October through November in their native range, and nesting occurs on riverbanks, beaches and other sandy areas. Females dig egg chambers that may contain nearly 80 feet of interconnected tunnels and multiple entrances and lay clutches of anywhere from 14-76 eggs. Green iguanas can live up to 10 years in the wild and 19 years in captivity.Green iguanas can live on the ground, in shrubs, or in trees in a variety of habitats including suburban developments, urban areas, small towns, and agricultural areas. Green iguanas are excellent swimmers and tolerate both salt and freshwater. They can submerge themselves for up to 4 hours at a time.

Visit IveGot1.org for a map of credible iguana sightings.

Green iguanas can cause damage to residential and commercial landscape vegetation, and are often considered a nuisance by property owners. Iguanas are attracted to trees with foliage or flowers, most fruits (except citrus) and almost any vegetable. Some green iguanas cause damage to infrastructure by digging burrows that erode and collapse sidewalks, foundations, seawalls, berms and canal banks. Green iguanas may also leave droppings on docks, moored boats, seawalls, porches, decks, pool platforms and inside swimming pools. Although primarily herbivores, researchers found the remains of tree snails in the stomachs of green iguanas in Bill Baggs Cape Florida State Park, suggesting that iguanas could present a threat to native and endangered species of tree snails. In Bahia Honda State Park, green iguanas have consumed nickerbean, which is a host plant of the endangered Miami Blue butterfly. As is the case with other reptiles, green iguanas can also transmit the infectious bacterium Salmonella to humans through contact with water or surfaces contaminated by their feces.