Deerfield-News.com-Deerfield Beach, Fl- Broward County resident Chauncy Devonte Lump,26 faces a federal charge of threats against the President of the United States, along with a county charge of making a false bomb report. Lump is being held on a $100,000 bond at the Joseph V. Conte facility in Broward. Lump had broadcast a seven-minute” Live Facebook” stream where he threatened to kill President Trump. The complaint stated Lump was dressed as if he was in the middle east, “white cream on his face, a towel on his head, wrapped like a turban, and what appeared to be a shower curtain over his body.”

“He killed my leader, and I have to kill him. I am ready for Donald, “I need to find the Donald because if I don’t find him, I am going to have to blow up Broward County,” 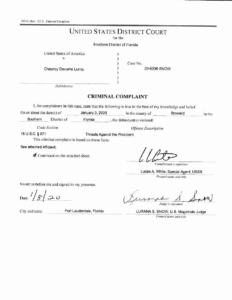